This note is intended to provide guidance on the Life to First Maintenance (LFM) of hot dip galvanised steel articles manufactured to AS/NZS 4680i in a range of atmosphere exposure conditions. LFM estimates are taken from ISO 9223 and ISO 14713 corrosion rates.

Corrosion resistance of galvanised steel in contact with other metals (bimetallic corrosion), chemicals, soil, fresh water or salt water requires special consideration and you are advised to contact the GAA or other experts for advice on these subjects.

No commercial coating for protecting steel has proven to be more serviceable and of such predictable performance in the Australian atmosphere than hot dip galvanising. Its good performance is due to its inherent corrosion control, high resistance to mechanical damage and its inertness to the high to extreme UV levels prevailing over most of the Australian continent.

Unprotected steel will normally corrode 10 to 40 times faster than hot dip galvanised articles; the higher ratios usually being in high-chloride environments. Hot dip galvanised articles provide significant advantages to the specifier by reducing life-cycle costs, the environmental burden and increasing amenity. Zinc is a naturally occurring element, is essential for life and is 100% recyclable.

The LFM of any particular hot dip galvanised article is the time interval that elapses after the steel is initially coated and before the galvanising deteriorates to the point when maintenance is necessary to restore protection of the steel base. LFM is a function of both the thickness of the zinc alloy coating and the nature of the environment. This is shown in Chart 1.

LFM for any environment is directly proportional to the thickness of the galvanised coating, which is normally a function of the thickness of the steel. In addition, the corrosivity of particular environments have been widely researched and the corrosion rates of both steel and zinc are classified in International and Australian standards as a function of the time the surface is wet, the amount of airborne salinity and the amount of airborne pollution present. These are divided into six general categories or zones by ISO 9223, AS 4312 and AS/NZS 2312, as shown in Table 1 and Table 2 (see also Corrosivity Zones on page 4).

In addition to Chart 1 (Life to First Maintenance) the following aspects of the serviceability of galvanised coatings should be taken into account:

Extensive studies have established that, over the long term, the service life of any hot dip galvanised structure is essentially proportional to the thickness of the hot dip galvanising coating for any particular atmospheric environment. The corrosivity of that environment can be assessed from short-term durability data, typically taken over 1-2 year periods. Table 2 shows the comparative corrosivity rate of various environments of carbon steel and zinc for the first year of service.

Time of wetness is the length of time during which the metal surface is covered by a film of water which renders atmospheric corrosion possible. It is influenced by factors such as the article mass, orientation of the article and the amount of pollution in the atmosphere. ISO 9223 defines this period as the number of hours per year that the relative humidity is above 80% for temperatures above 0°C.

Airborne salinity is a powerful stimulant for atmospheric corrosion and the deposition rate of salt in non-sheltered situations is directly proportional to the concentration of salt in the atmosphere. Airborne salt has a major influence on corrosion rates. The airborne salinity is strongly dependent on the variables influencing the transport inland of sea-salt, such as wind direction, wind velocity, local topography, distance of the exposure site from the sea, etc.

Rainfall also influences corrosion rates and has the effect of either stimulating or reducing corrosion, depending on the environment. In coastal atmospheres, the washing effect of rain reduces corrosion, while at those locations well away from the ocean the situation is reversed and the corrosive action of rain is more significant.

The influence of industrial pollution in Australia (commonly measured as the amount of SO2 emissions) on the service life of galvanising is very low. This is due in part to the environmental pollution constraints introduced from the early 1970's, notably regarding the reduction of SO2 emissions. In all cities around Australia, the macro-environment for industrial pollution is now not considered an important influence on corrosion rates.

Corrosion rates may increase significantly above the values shown in Chart 1 due to quite localised micro-environments (the conditions prevailing around the structure), such as severe coastal locations where the surface is exposed to high levels of airborne salinity, but not subjected to the cleansing influence of rainwater and has a lack of good ventilation and drying.

Every effort should be made to identify the prevailing conditions around the location of the article to be galvanised prior to finalising the design. This will strongly influence the decision on the type of protection required. For example, the underside of a bridge, which is stretched over a body of water, will have a micro-environment that is likely to differ from the general environment of the bridge.

Where the steelwork is partially sheltered (such as inside sheds with large openings and under the eaves of domestic buildings), it is recommended the specifier assume these are considered as part of the external environment. Another example of this is in the design of lintels for domestic buildings using masonry construction, where hot dip galvanised sections are specified by the Building Codeviii.

In some instances, where the micro-environment is significantly more severe than for the rest of the structure, the area may best be provided with a Duplexix coat to provide additional protection in the areas subject to the micro-environment. Buildings containing industrial processes, chemical environments, wet or contaminated environments should be given special consideration and will require expert advice for the structure to obtain the design life. In some cases, alternative materials should be considered. Slunder & Boyd and Porterx also provide general guidance on particular chemical pollutants.

Other Environments Affecting the Durability of Hot Dip Galvanised Coatings

Other environments include articles buried or in long term contact with soils, immersed in or splashed by fresh or salt water, abrasion, exposure to specific chemicals, contact with concrete or wood and bimetallic corrosion. Advice on these exposures is available from the GAA or specialized corrosion consultants.

In general the specifier should answer the following questions from AS 4312:

a) What is the nature of the general or macro environment?

c) Is the environment likely to change?

d) Should only the worst environment be considered or should the project be divided up into different environmental zones?

AS 4312 provides good advice on determining the likely corrosivity of a particular environment and in addition provides maps of areas of Australia to assist in general determinations.

At the time of writing, ISO 9223:2011 and ISO 14713:2009 had been revised to include a new zone CX (Extreme). This has been introduced to cover specific industrial and industrial marine locations not previously included in the Standards. The updated standards also allow for the effects of tropical zones not previously covered, although AS 4312 and AS/NZS 2312 recognised these zones through the addition of the tropical zone to allow for the decreased life of standard paints in high UV areas. Hot dip galvanising is not affected by the UV of the tropics and has, for a long period, been successfully used in these areas.

For some guidance on classifying the climate and the corrosivity zone the hot dip galvanised steel will be exposed to, please refer to the map below (obtained from www.bom.gov.au) as well as Table 1. 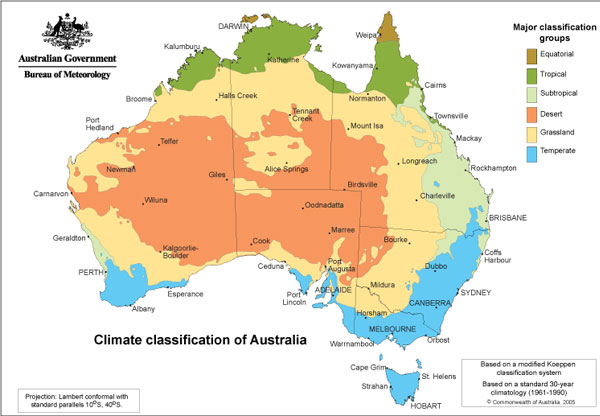 AS/NZS 2312 and AS 4312 are still usable without this new zone included in their text, although specifiers will need to follow the advice of ISO 9223 and ISO 14713 when they encounter design situations with extreme corrosivity. For this reason, the GAA has included the ISO standards in our data showing performance of hot dip galvanizing in all situations.

Galvanising protects the base steel until the zinc has largely corroded away, so the article may be left unmaintained if the corrosion rate of the coating is insufficient to affect the performance of the article in its designed period of use.

If a longer life span is required, maintenance of the coating should be carried out by stripping and re-galvanising (part of) the structure or by painting while some original coating remains. AS/NZS 2312 recommends that maintenance painting can be deferred until about 2% of the article exhibits "red rusting". In contrast, for conventionally painted steel, maintenance painting should not be deferred beyond an area of 0.2 - 0.5% "red rusting", as corrosion of the steel can progress unobserved under a paint film. Costs of ultimate maintenance painting to extend galvanising life are normally lower than for reinstating painted steel, because the residual galvanising is strongly adherent and readily abrasively blasted back to a sound substrate.

Deposition of chlorides in coastal areas is strongly dependent on the variables influencing the transport inland of sea salt, such as wind direction, wind velocity, local topography, wind sheltering islands outside the coast, distance of the site from the sea, etc. Extreme effect by chlorides, which is typical of marine splash or heavy salt spray, is outside of the scope of this Chart. Corrosivity classification of specific service atmospheres, e.g. in chemical industries, is outside of the scope of this Chart. Surfaces that are not sheltered or rain-washed in marine atmospheric environments where chlorides are deposited can experience a higher corrosivity category due to the presence of hygroscopic salts.

In environments with expected “CX category”, it is recommended that the atmospheric corrosivity classification from one-year corrosion losses be determined. One-year exposure tests should start in the spring or autumn. In climates with marked seasonal differences, a starting time in the most aggressive period is recommended.

The concentration of sulfur dioxide (SO2) should be determined during at least one year and is expressed as the annual average. However, in Australia, SO2 is so low in most environments that it is generally considered that It can be ignored, other than for specific industrial applications or extreme traffic examples.

Coastal areas are normally defined as between 50 metres to 1 Km inland from sheltered seas and between 1 Km and 10-50 Km from surf beaches depending upon prevailing winds and topography. More details and examples are available in AS 4312. The Australian Bureau of Meteorology provides weather charts for Australia at www.bom.gov.au. These show average and recent conditions, including rainfall, temperature, humidity, evaporation, wind and UV.

Comparative corrosion rates for steel and zinc from ISO 9223. 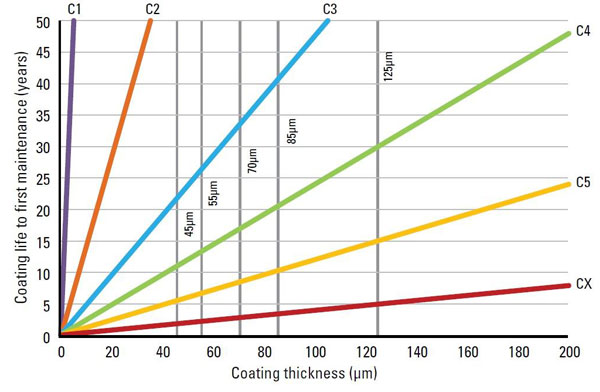 This chart is supported by case history evidence in Australia, where service life records of 50 years are common and up to 110 years are recorded. The Life to First Maintenance chart is available as a standalone document.

The LFM range for a particular hot dip galvanising coating thickness and each corrosivity zone can be read from the chart. For example, the LFM range for a hot dip galvanised article with an 85 μm thickness and located in the C4 (High) corrosivity zone is 20 to 40 years. This chart is supported by case history evidence in Australia, where service life records of 50 years are common and up to 110 years are recorded.

The atmospheric corrosion rate of hot dip galvanized articles is predictable and offers considerable benefits to the specifier over uncoated steels. In many cases, it is essential to provide corrosion protection for the steel in order to meet the design life of a structure and in most cases hot dip galvanizing provides an economical and attractive solution.

Material supplied by the GAA. 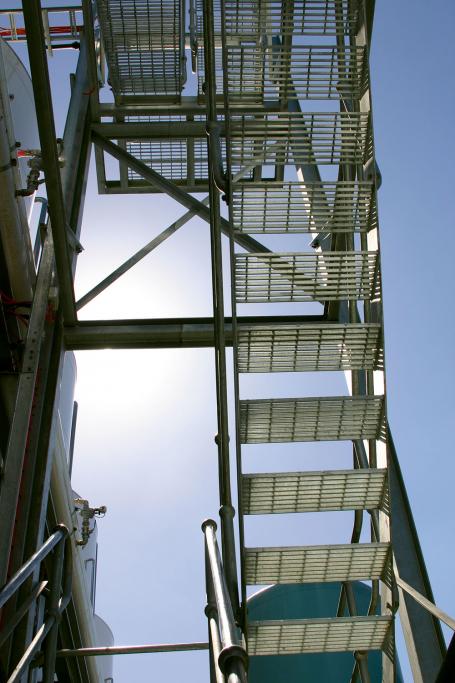