Case Study - Architectural Use of Steel

Nominated for the Sorel Galvanizing Award in 2011, and later receiving a High Commendation at Intergalva 2012 in Paris, Korvest Galvanisers recently finished an ambitious project for the construction of Manuele Engineers' new South Australian Head Office. The challenge of this project was to combine the architectural use of hot dip galvanising into a decorative façade for a modern office building.

The innovative use of hot dip galvanised, custom designed in-fill panels contrasts brilliantly with a painted RHS support structure and glass, enhances the visual amenity of the office, and states with intent the nature of the business within. Manuele Engineers had previously used galvanised products on the façade of their Clovelly Park office and wanted to use the same technique this time, but with a more prominent, and intricate steel fabrication. 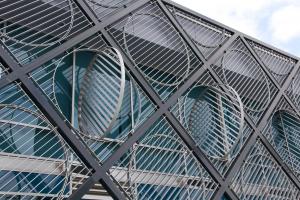 A total of 42 Tonne of mild steel was hot dip galvanised at Korvest’s Adelaide facility with very careful attention paid to the quality and finishing of the job to maintain long life durability, but also visual attractiveness and construction compatibility for these 2 part panels that had to slot together on site.

Through early consultation with the project, Korvest was able to provide fabrication support to the architects to avoid any issues down the line and ensure that the jig-saw like nature of this project would work out.

While Manuele’s new office building is itself striking for a fabrication workshop, the bare building is more akin to being a commercial showroom. By encasing the office complex in the steel façade, Manuele Engineers have clearly stated what their company stands for. 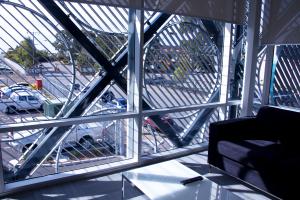 Whereas other corrosion protection offerings continue to try and undervalue hot dip galvanising, this project successfully highlights the melding of galvanising with paint to produce a striking visual statement. As the architect noted, hot dip galvanising showcases the steel itself rather than simply covering it, and provides a welcome contrast which draws the eye. 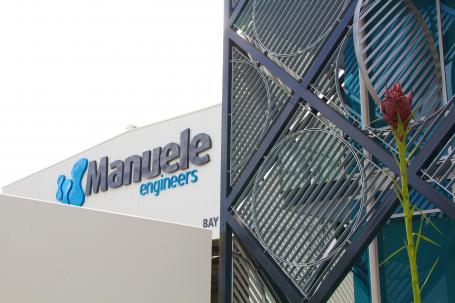