Country folk have long enjoyed a well-earned reputation for no nonsense straight talking, free from the corporate gobbledygook that increasingly clouds conversations in the business world.

They’re trustworthy, honest, what-you-see-is-what-you-get people, renowned for conducting themselves with integrity…and that pretty much epitomises the way Bowhill Engineering on the banks of the River Murray in regional South Australia’s Murraylands conducts itself.

All of which goes a long way to explaining why the company in the hamlet of Bowhill just north of Mannum values and cherishes the working relationship it enjoys with Korvest Galvanisers in Adelaide.

As Bowhill’s Project Manager Schalk Holl said, when you come across a cultural fit in business, you embrace and nurture it.

“That’s what we’ve done with Korvest Galvanisers and we now enjoy an open, honest and at times robust relationship, to the mutual benefit of both parties,” Schalk said.

“We also value the exceptional technical expertise provided by, among others, Korvest’s Peter Freeth, along with a solutions-focused approach and genuine commitment to customer service displayed by George Elvin.

“As is the case in the country around Bowhill, there’s no lip service at Korvest as the company quite literally goes the ‘extra mile’ for us. They’re but a phone call away when needed and are quite happy to hop into the car and head out on the 90 minute road trip to our premises if required.”

By way of example, Schalk points to a recent incident on the Southern Expressway Duplication Project, where Bowhill fabricated a number of very large overhead gantries.

“While this proved to be a particularly interesting and challenging project, it also displayed how Korvest thinks outside the square and works with us to find an effective and efficient outcome,” Schalk added.

“The size of the gantries – L-shaped pipes some 500mm in diameter – required us to make special transportation jigs to get them on a truck and frames to support them on the journey to Korvest.  Once there, Korvest designed and engineered a once-off transportation trolley with nifty outriggers, allowing the frames and their eight tonnes of steel to be lowered onto the trolley which was then pushed into the factory.

“They then reversed the process going out and it all worked like a dream. Without this solution, we would have incurred huge costs getting the steel into the factory for galvanising.”

Another important element of the partnership is the commitment from both parties to sit down at the outset of each project to discuss all elements and arrive at a design and work process that delivers the best possible end result.

This was particularly evident during the works to redevelop the locks on the River Murray. With the substructure under water needing galvanising, the companies sat down, brainstormed and tossed ideas around and agreed on a hardy and durable galvanising solution that exceeded requirements.

In the process, it certainly endeared Bowhill to its end client, SA Water, who was so impressed it has kept the rest of the lock upgrade work with Bowhill Engineering.

In recent months, Korvest has also attended to all the galvanising on the River Murray Ferries upgrade, with one already completed, one in fabrication and another three on track to go to tender in the new year.  And Schalk’s in no doubt that Korvest Galvanisers will again be intimately involved in preparing the tender response, to package what he hopes is a winning tender that delivers within the budget and to tight deadlines without in any way compromising on the quality of the product.

As with any relationship, regardless of how good, things can and will occasionally go awry.  But as Schalk said, when they do it’s not the situation that’s most important, it’s how you deal with it that’s remembered long after the incident itself is forgotten.

“Korvest Galvanisers makes it its business to address the problem immediately, efficiently and to our total satisfaction.

“They make the time for us…and that makes us feel special.” 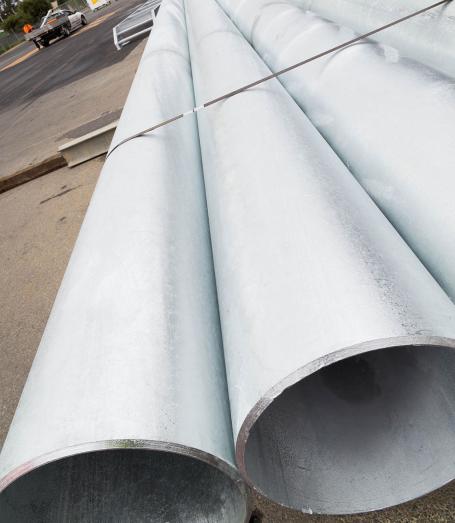