Coopers Brewery in South Australia is the largest privately owned brewery in Australia and has been run by the Cooper family since 1862. Due to ever growing success the Cooper family have invested in a $65 million development within their current location in Regency Park, Adelaide. This development is to facilitate a purpose built “in-house” maltings production plant to service both the Coopers brewery and retail to domestic and export customers. This will remove reliance on a third party for malt supply allowing the brewery to become self-sufficient. The new facility includes six barley and six malt silos each measuring nineteen metres high and nine metres in diameter and capable of holding 500 tonnes of barley or malt.

Historically all previously erected silos on site have been painted to a three coat system but the maintenance costs have been found to be prohibitive so an alternative had to be found. Stainless steel was not a consideration due to cost and in consultation with the Ahrens Group it was decided to remove paint from the scope of any new silos as it was known from the outset that on-site remedial works would be required. Hot dip galvanising was deemed to be the most appropriate and cost effective coating system both during installation and over the life of the assets. Being a private sector project, the asset owners have been involved from day one and have a vested interest in asset life cycle values.

One of the main considerations for the brewery was the impact the new production facility would have on the immediate surrounding area. The development of the current site, including the silos, is very much on the fence line of one of Adelaide’s busiest east/west transport links in a mixed residential and commercial area with aesthetics being a major factor for the Cooper family.

In total approximately 340 tonnes of galvanising has been carried out by Korvest. All the galvanised silo support structures, which were a design and construct project for the Ahrens Group, were fairly standard structures that form the silo support bases and extend upwards into an exo-skeleton surrounding the actual silo which is formed from pre-shaped galva-bond panels.

Double dipping of the approximately 200 asymmetrical shapes that formed the roof and hopper segments proved to be a huge technical hurdle. According to theory, these sections fabricated from material including 180 PFC, plate up to 16mm, and 8m² of 3mm welded sheet would distort out of shape and lose their dimensional stability due to the multiple material thicknesses involved as well as the temperature differentials caused by double dipping. With some serious thought and consideration into how to overcome this issue, the production team managed to not only keep the sections straight with minimal loss of form, they also managed to optimise the quantity of items dipped.

In all, we are very proud of this project not only for its profile in the community but with our ability to overcome the technical issues that were inherent from the outset. A big hats off to John Forrest, Wayne James and the boys in Galvanising for a job well done. 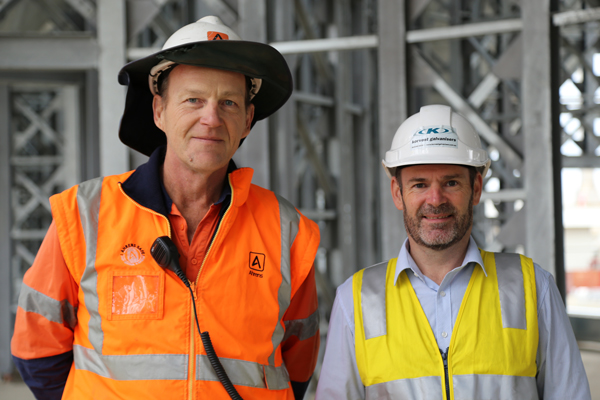 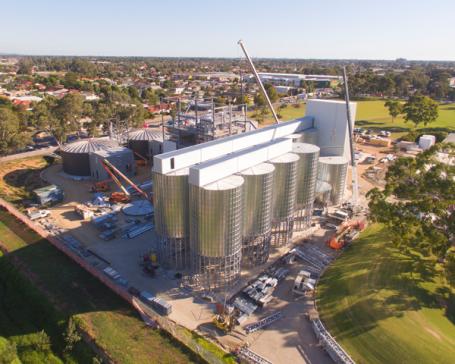